A new home for Boskoop

In the Dutch village of Boskoop, the old town hall was given a new lease of life. A welcoming community home has been created by blending in public services such as the library and a daycare for children while maintaining the historic character. The result is a living monument for the citizens that merges past and present.

The former town hall of Boskoop, a village situated in the province of South Holland, is a characteristic national monument dating from 1929. It was not only in need of restoration, but was to be transformed into a warm and lively community center on behalf of the Municipality of Alphen aan den Rijn and Rijn en Venen Library. An important step in this process was the integration of new functions. The building now houses the library, an after-school program, and several other social care organizations.

Het raadHuis has everything in it to become the place where it all happens. One that attracts, releases, recharges. This community house is an example of a living monument where new memories are created.

The raadHuis Boskoop is a co-creation of includi and MARS Interieurarchitecten. To give shape to the new interior, the aatvos team came together with the library crew for a design workshop. During the session, they dove into historical details, what the space should signify, ways to revive the original building, and how to integrate the library into this third place.

MARS Interieurarchitecten has carefully preserved and restored the formal, authentic character of the main building on the inside and outside. “From the idea of combining a common pair of jeans with a fancy shirt, we set up this plan. A neat suit for the whole building did not fit, with a function of a public library”, remembers Marcel van der Veer, founder and interior architect at MARS Interieurarchitecten. Stylish woodwork, natural stone, stained glass windows, beautiful upholstery, masonry details, cast iron radiators, Art Deco lamps and more provide a distinct experience. “Now it has become a tidy combination of informal and formal, appropriate to the different functions,”

Efficient use of space

Nice fact: The raadHuis is now an organization hub. In the original town hall – in addition to the administration and officials – there were also the municipal offices, a police station with cell space, the fire department, and a veterinarian. In other words, the space was used very efficiently. As in the past, the building will now host and cater to a variety of guests. For example, in addition to books, there are maker-spaces (including 3D printing and robotics) in the library, a turtle garden for children, Boskoop’s historical book collection, and a cozy coffee corner. Besides the childcare organizations, the building also houses a space where Boskoop citizens can go for youth assistance, housing, support, and welfare. The municipality’s service center will also be present.

Het raadHuis has become a tidy combination of informal and formal, appropriate to the different functions.

The variety of functions required a design that would unite two different worlds: past and present. The historic building naturally reminds people of the past. The past aside, Boskoop is a village that is both nationally and internationally known for its tree nurseries; a conceptual starting point that is reflected in the interior by the use of natural colors and prints, agricultural materials, and lots of green. The interior reinforces the new identity of the raadHuis as the social heart of Boskoop.

The wing of the house is a space that has been altered many times over the years, offering the opportunity to give it a more informal and low-threshold character. In this part of the building, where the library is now located, modern materials such as galvanized stairs, a concrete floor, steel facades, and exposed metal pipes were chosen as a contemporary accent within the monumental framework. The so-called arched door – shown on historical drawings, but bricked up later – was reinstated. Now, this second entrance provides more informal access to the library, allowing the building parts to function well despite being separated from each other.

Living in the mo(nu)ment

Referencing the history on the one hand and the current function of the building on the other, the name raadHuis – town hall – has been retained. RaadHuis is intentionally spelled with a capital H to emphasize that it is the House of and for the citizens of Boskoop.

Just like in the past, the intention is that the renovated town hall becomes the centerpiece of Boskoop. Creative director Aat Vos underlines: “This community house has everything in it to become the place where it all happens. One that attracts, releases, recharges. Where everyone, young and old, knows how to find their way and where to go for the most diverse needs and issues. The raadHuis is an example of a living monument where new memories are created.” 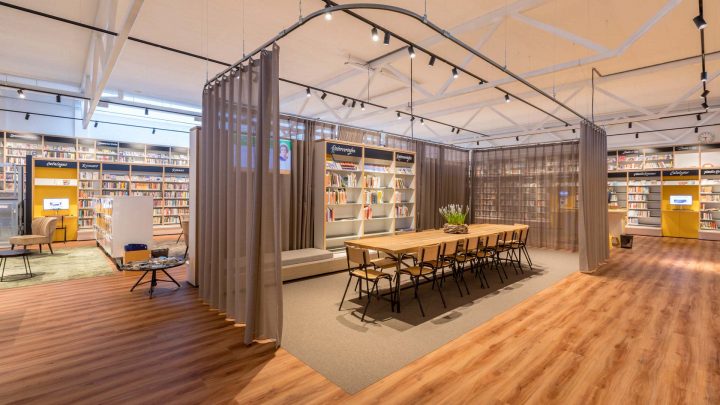 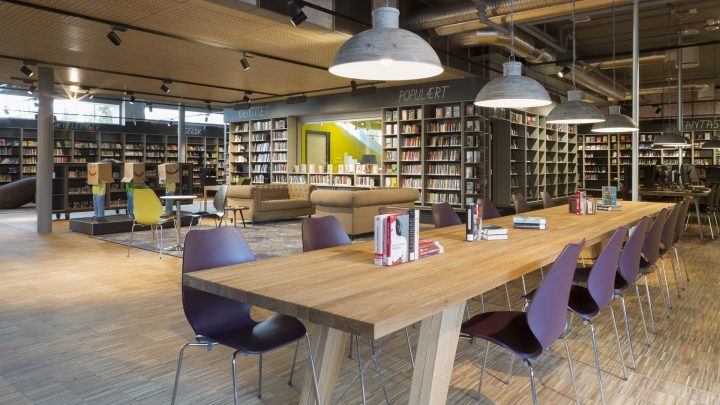