On the pulse of time

How do you polish up a slumbering jewel from the 1980s? In Germany’s Langenfeld, citizens gave a space the light it needed to shine. Over the past three years, a de-institutionalized library has emerged here, meeting its patrons at eye level and with a modern face.

The town of Langenfeld in the Rhineland is located 30 km north of Cologne and has a population of almost 60,000 people. Historically, it was an amalgamation of separate villages which was elevated to city status as recently as 1948. Today, Langenfeld makes a young and dynamic impression: Modern architecture spiced with historic buildings characterizes the city center. In its midst is the city’s library: The building from the 1980s, which is shared with other actors of the local cultural scene. Langenfeld decided to harness the full potential of this special location through fundamental renovation and redesign.

Libraries need to reposition themselves as social hubs.

Citizen participation as the key

“Libraries of this age, such as the Langenfeld City Library, often need a major makeover to meet the demands of the 21st century,” reports Aat Vos, Creative Director at includi. “In addition to technical modernizations, this primarily means libraries repositioning themselves as social hubs.” While the list of technical updates is defined relatively quickly, the question of how to develop a public library into a place where urban society feels at home is a bit more subtle. The key to the answer lies primarily in the countless conversations that the public library staff has had with its patrons of all ages.

Trainer and library consultant Julia Bergmann, who has been involved in several includi projects, was brought on board to lead a comprehensive participation process. Together with the library’s various visitor groups – from young to old – the design thinking expert developed initial prototypes, for example for exclusive learning spaces, a multifunctional event stage, and cozy seating areas. “The conversations with our audience were incredibly valuable,” recalls Martina Seuser, head of the Langenfeld City Library. “Not only did we get to know our patrons’ wants and needs better, but we also grew closer as a team.”

The insights and ideas from design thinking flowed into the week-long workshop with the aatvos team and were translated into spatial layouts, color, light and material concepts, and furnishing designs – fundamental ideas for the redesign of the Langenfeld City Library, which were elaborated and implemented under the direction of includi together with MARS Interieurarchitecten and Franke Architektur.

The result of this intensive process is something astounding: An open library space embraced by its media inventory, creating a bridge between smaller rooms with specific functions. It includes a modern makerspace with 3D printers, a digitizing station, and a maxi chess set for matches while standing, as well as a separate room for young people on the first floor. These areas are visually connected by a colorful wall design by KAPUZE. The children’s area, an in-house art gallery and a separable event room with a professional stage are located on the second floor. Scattered throughout the building are cozy seating areas with armchairs, sofas, and cocoons that invite you to read, play, and linger. For those seeking a quiet place to work and do research, individual and group study areas with state-of-the-art equipment are available.

Not only did we get to know our patrons’ wants and needs better, but we also grew closer as a team.

Let there be light

“Through local newspapers, we called on the citizens of Langenfeld to donate their old lamps to us,” recalls Martina Seuser. An impressive chandelier with over sixty glass lamps is not only the visual centerpiece but also symbolic of the community’s involvement: Langenfeld citizens brought more than ninety lamps to the library, adding a personal touch to the work of light art that now fills more than just the void in the stairway. “We are impressed by the response from the city community. Our chandelier has been getting regular visits from those who have contributed their part to the overall image since it opened.”

Most of the media stock is found on wall shelves, opening up the center of the room. The so-called ‘super shelf’ – spanning an impressive 31m in length and standing 7m tall – connects the two floors with their mezzanines. With its bold blue color, it harmonizes with the light oak wood of the other shelves. Besides wooden materials, gray-brownish concrete owes its unique color to sand from Langenfeld’s surroundings. A feel-good, informal atmosphere with a touch of imperfection is the result. Langenfeld City Library is an 80s gem revived by local input coupled with programming variety. De-institutionalized and approachable, this space is ready to cater to its 21st century users. 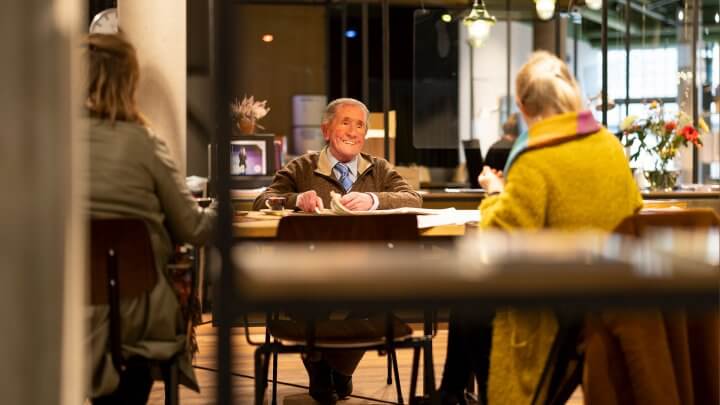 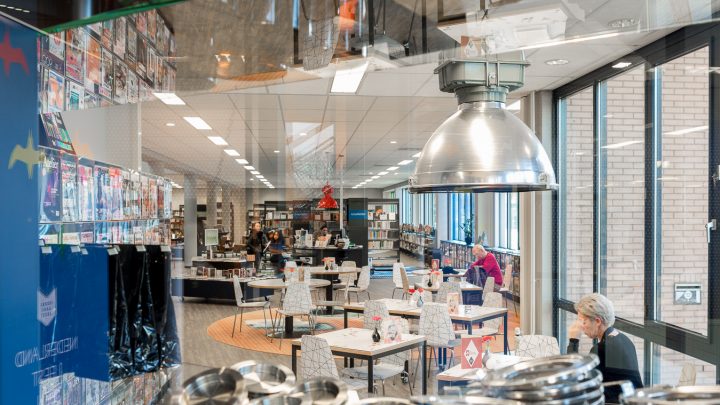