In a suburb with a distinct village character, includi developed the interior of a brand new multifunctional center: De Plataan. This accessible, central gathering place for all ages contains both a volunteer and a welfare organization, along with a library. In addition, various organizations use the building’s spaces. De Plataan breathes new life into the neighborhood and stimulates social cohesion.

Besides a historic city center, Naarden (the Netherlands) has several neighborhoods that originally functioned as garden villages and have a strong village character. This is certainly true of the neighborhood of Keverdijk, of which the core was recently revitalized with the input of 600 local residents involved. An important part of this revitalization is the new construction of the multifunctional center De Plataan by BbDW (Built by De Wildt) that directly connects to the shopping area of Keverdijk. Together with the new adjacent mosque, De Plataan strengthens the social cohesion within the heart of this garden village.

In addition to a multifunctional center – for which includi developed the interior concept – the De Plataan building also houses a health center with its own entrance. Among other things, this is where residents can find a general practitioner’s practice and physiotherapist. The multifunctional area spreads over the first floor into part of the basement. It includes the public library of Naarden (a branch of the Gooi en meer Library), regional welfare organization Versa Welzijn and volunteer organization De Schakel.

The living room of Keverdijk meets an urgent need in a time of rapid digitalization, an aging population and the development of the participation society.

All these organizations were previously in their own buildings. Now, they live together under one roof in this new community center. This was also the most important design challenge: how can the range of functions of De Plataan fit into one (limited) space? How do the various spaces relate to each other? How can interior design strengthen communities? Connection and communication were at the core of the development process. In close cooperation with both the various organizations in the new building and the future users, includi’s concept for a new third place in Naarden was born.

Committing together to an accessible place

“As the living room of Keverdijk, the center of the neighborhood, we as volunteer organization De Schakel, Library Gooi and Meer and Versa Welzijn/SCAN want to work together with the neighborhood to be an accessible place where all residents of Naarden have the opportunity to participate and actively contribute to organized and spontaneous activities. These activities span a wide range: from education, information, culture and recreation to welfare, prevention, exercise, advice and participation. In this way, we can ensure a qualitative and appropriate level of facilities that contributes to everyone being able to participate and continue to develop. An urgent need in a time of rapid digitalization, aging and development of the participation society,” says Marian Buvelôt, director of the Gooi en meer Library.

To translate these needs into an appropriate interior design, includi organized an online user survey to gather input for the design and a multi-day design workshop with the organizations involved that had to take place remotely due to COVID-19 restrictions. Finally, a live mini-workshop with card games, specifically aimed at young people, took place at a later stage.

The centerpiece of the open, public space is the bar with a kitchen where anyone from the neighborhood can spontaneously approach.

A seat at the table for everyone

The outcome of the user-participation process was translated by includi into a warm and colorful interior design with a quirky identity thanks in part to the use of wallpaper in different patterns behind the bookcases. “The centerpiece of the open, public space is the bar with a kitchen where anyone from the neighborhood can spontaneously approach. The multifunctional character of De Plataan is also reflected in the multi-purpose furniture that is easily movable. The space can be arranged as you wish! For example, curtains can be used to create separate activity areas. If more space is needed, the bookcases can be lined along the walls as much as possible,” explains Tessa Wennink, Interior Designer at includi.

The three organizations within De Plataan can organize exclusive, screened activities in various multifunctional spaces. A special meeting place in the basement has been designed for and by young people, which they can make their own. Kids and teens can turn it into a nice party or movie night by stacking, sliding, rearranging… you name it. In addition, the Versa Welzijn organization has developed a sound studio where youngsters can express their musical creativity. In Naarden, includi’s mission of fueling inclusivity succeeded by creating a pleasant, inspiring and safe gathering place. Where people once cultivated their gardens, third place De Plataan now offers them the opportunity to cultivate their budding community.

The interior design of Multifunctional Center De Plataan in Naarden by includi is a vision that was developed with the client during a workshop. 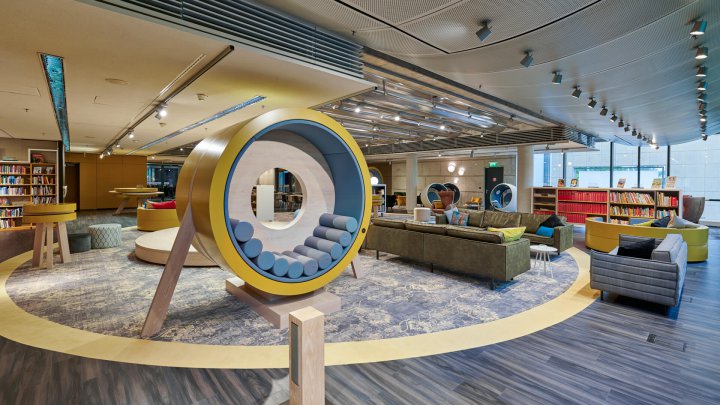